RMB Lawyers is the best regional law firm in Australia 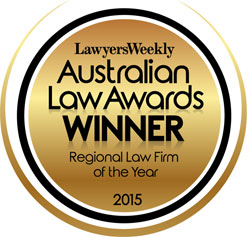 Managing partner Craig Osborne accepted the award at the Westin Hotel in Sydney during the 15th annual Australian Law Awards on Thursday.

Mr Osborne said RMB took out the Regional Law Firm of the Year category from a field of very impressive finalists.

‘’One was a 200 person law firm in Western Australia and another, Queensland’s largest independent firm,’’ he said.

‘’The definition of regional is pretty broad.’’

Australian Law Awards are recognised as a premier legal event in the nation and are attended by more than 600 people.

RMB Lawyers has much to celebrate in 2015.

It recently started celebrating its 130th birthday with a $25,000 commitment to a law scholarship fund at the University of Wollongong.

It was the law firm's second $25,000 contribution to the Jack Goldring Memorial Fund launched in 2013 in memory foundation dean of law, Professor Jack Goldring, who established the Law School in 1990.

From that contribution a $10,000 annual scholarship is awarded annually for a UOW law student who has demonstrated a commitment to social justice.

RMB Lawyers won the Momentum Energy Excellence in Business Award at the 2014 Illawarra Business Awards and began its 130th birthday year in February with Mr Osborne talking about how the firm had come from humble beginnings to be one of the largest regional-based law firms in NSW.

It has introduced many innovations such as being the Australian test site for the introduction of the quality assurance standard LAW 9000 in 2004, and introducing revolutionary fixed fee charging in 2014.

Mr Osborne said but underlying it all everyone in RMB cared about their community.