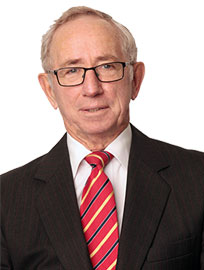 Solicitor then partner of Bernard L Galland until 1990.

Born in Goulburn, Michael Galland, returned from Sydney to practice in a local firm with his father “Bernard L Galland & Co” in 1965 after graduating in law at Sydney University. In 1990, that firm merged with two others to become Galland Elder Lulham.

Mike, through his father, and in his own right, has had a long and energetic association with the Goulburn community assisting in the successful conduct and resolution of the legal matters of the members of that community.

Mike enjoys tennis and now watching Rugby along with travelling and surfing.