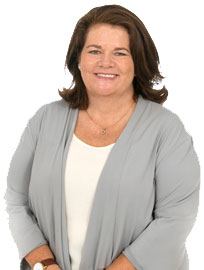 Frances Smith is Special Counsel in the Compensation Law Division of RMB Lawyers.

Fran grew up in Campbelltown, attending St Patrick's College and graduating from Sydney University with a Bachelor of Laws in 1985.

Fran is an Accredited Specialist in Personal Injury Law and a member of the NSW Law Society and Australian Lawyers Alliance.

Fran works primarily from the Camden office and brings a wealth of experience to RMB Lawyers having practised almost exclusively in all areas of Plaintiff personal injury litigation since her admission as a solicitor more than 30 years ago. She has previously worked in two large and busy personal injury practices, one of which is a national publicly listed firm.

Fran has pursued many hundreds of Plaintiff's claims through the District and Supreme Courts as well as the NSW Court of Appeal and Applications for Special Leave to Appeal to the High Court. She has extensive experience in assisting Plaintiff's injured in motor vehicle and work accidents as well as accidents in public places. She recognises that even an apparently minor injury can have a devastating impact on a Plaintiff's psychological condition as well as their ability to provide for themselves and their families. She prides herself on developing a rapport with her Clients and explaining the legal maze to them in plain English and providing them with realistic advice in terms they can really understand. She is passionate about achieving results for her Clients which equip them with the resources to rebuild and repair their lives after they have suffered injury.

Fran is a lifelong resident of the Macarthur region. She has had a strong involvement in the local community particularly through the schools and sporting clubs of her four children. These include St Paul's Primary School, St Gregory's College, Magdalene Catholic High School, Camden Rams Rugby League and Camden RSL Netball. She enjoys spending time with her large extended family who reside in the Camden and Wollongong areas. She has a keen interest in travel.