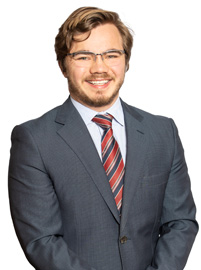 Rhygan works in the Wills and Estates Division at the Forbes office of RMB Matthews Williams Lawyers. He also has experience in Criminal Law and Civil Law cases in the Local Court.

Rhygan graduated from Bond University on the Gold Coast in 2017 with a Bachelor of Laws. He completed a Diploma of Legal Practice at the College of Law the same year, and in March 2018 was admitted to the Supreme Court of Queensland.

After completing his legal training in 2017, Rhygan worked as a lawyer in Mt Isa for two and a half years, working mainly in Criminal Law. He then spent a year working in Human Resources in the mining sector.

Rhygan has a particular interest in Estate and Succession Planning as well as Conveyancing and other Property Law matters. He also enjoys advocacy in the Local Court in Criminal, Traffic and Civil matters.

Rhygan is a highly accomplished gymnast, having represented Queensland and Australia during his 19 years competing in the sport. He also spent nine years coaching gymnastics, and is looking for opportunities to volunteer as a coach in the Central West. He plays rugby for the Parkes Boars and plays social squash and golf in Forbes.