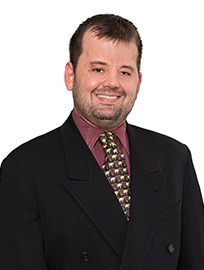 Patrick is part of the Business Transactions and Dispute Resolution team at RMB Lawyers, based at the firm’s Queanbeyan office. He also enjoys dealing with Wills and Estates, Property Law and Commercial Law, and has experience in Compensation Law, Employment Law, Criminal Law and Civil Law matters.

Patrick graduated from the University of Alabama in the US in 2005 with a Bachelor of Arts (Political Science). He completed a Juris Doctor (Doctor of Laws) degree at the University of Canberra in 2012 and received his Graduate Diploma in Legal Practice from the Australian National University in 2013. He was admitted to practice as a solicitor in 2013.

Patrick has practised law in Canberra and NSW, working across a wide variety of matters. He has appeared in the ACT Magistrates Court, the ACT Supreme Court, the NSW Local Court and the NSW District Court for a number of matters.

Patrick grew up in New Orleans, where his family home was flooded when Hurricane Katrina devastated New Orleans in 2005 – his final year of study at the University of Alabama. He has dual Australian-US citizenship as his mother is Australian, and moved with his family to Australia in 2008 to undertake Law studies. He now lives in Bungendore, where he is a member of the local Rotary Club. In his spare time, Patrick enjoys cooking, working out, writing songs and volunteering.