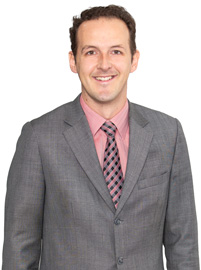 Martin has a Bachelor of Arts (Distinction) and a Bachelor of Laws (Honours 1) from the University of Wollongong, and a Graduate Diploma of Legal Practice from the Australian National University. He became an Accredited Specialist in Personal Injury Law in 2020.

Martin sees his role as a Compensation Law specialist as guiding his injured clients through a complex and totally foreign legal system, while achieving the best possible outcome to give them the resources to get on with their lives. Martin has worked in Compensation Law in the Illawarra and in Sydney. He started at RMB in 2010 before going to work in Sydney in 2015, where in one role with a leading national law firm he worked on behalf of insurance firms and at another firm he worked with both plaintiffs and defendants. So he knows Compensation Law from both the client’s and the insurer’s perspective, and has brought those skills back to RMB.

Martin was born in Wollongong and grew up in the city. He is passionate about football and is an independent director of Football South Coast. This role has given him the responsibility for various projects within the local football community and active involvement across male, female and junior football in the Illawarra. In his spare time, he enjoys hiking, and when he can he likes to travel to climb mountains and see the world.