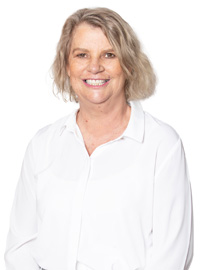 Janine worked as a legal clerk in Condobolin for 21 years before completing her Licensed Conveyancer qualifications in 2004. Since then she has worked across all the conveyancing matters that arise in a rural community like Condobolin, including residential (residences and vacant land) and rural conveyancing – farms, freehold land, Western Lands, Crown Lands, water sales and Crown Licences, leases and sharefarming agreements.

Janine says she enjoys conveyancing because it is generally the happiest aspect of the law, dealing with vendors who want to sell and purchasers who want to buy.

Janine joined Holby, Palmer & Mills in Condobolin in 1983. In 1988 that firm became part of Matthews Williams Solicitors and Conveyancers, which in turn merged with RMB Lawyers in July, 2021.

Janine grew up in Condobolin. She married a local farmer and they have three children – and now three grandchildren. Janine is secretary of Western Plains Regional Development Inc and a member of the Lachlan Arts Council. In her spare time she enjoys reading and her book club, travel, live music, theatre, movies, sport and shopping.