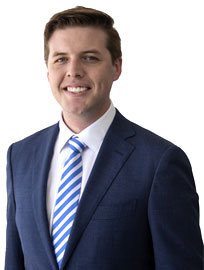 Wills and Estates Division and Real Estate and Town Planning.

Paul graduated from the University of Wollongong in June 2015 with a Bachelor of Laws and a Bachelor of Commerce (majoring in Management). In December 2015 Paul obtained his Graduate Diploma in Legal Practice from the Australian National University and was admitted as a Solicitor in the Supreme Court of NSW.

Paul is the Solicitor responsible for assisting clients with their Estate Planning and Probate and Estate Administration matters at RMB's Nowra Office. He works within a strong team that is committed to advising and assisting clients with the process of preparing their Wills, Power of Attorney and Appointment of Enduring Guardianship documents. As a Probate and Estate lawyer, he provides expert advice to executors about the often complicated process of administering and distributing their loved ones’ estates. Paul is strong supporter of the Cancer Council’s pro-bono Wills program.

Paul is also a member of RMB’s Real Estate and Town Planning team, assisting clients with the buying, selling or leasing of commercial and residential real estate. In particular, Paul has developed a strong reputation for specialising in inter-state conveyancing, assisting with property purchases and sales in Queensland, Victoria and the ACT.

Paul he has lived in the Shoalhaven his entire life.

Paul currently serves as the President of the Shoalhaven and Districts Law Society (SDLS), having previously served as the Young Lawyer Representative from 2016-2018. As SDLS President, Paul is an advocate for not only the legal profession itself but for important law reform issues impacting the community at large.

Paul is the graduate representative on the University of Wollongong Council, the peak governing body of the university. Paul previously served as the undergraduate representative on the Council from 2013-2015 whilst studying at UOW. Paul is also a director of the company UOW Pulse Ltd which is responsible for the management of all non-academic services and facilities at the university.

In 2018 Paul received the Tom Harvey award for Citizenship, in recognition of his contribution to local youth charities and community causes. Since 2010, Paul has been a national ambassador for the Smith Family's Learning for Life program, and has attended a number of events across the Illawarra and NSW as a key note speaker to talk about the power of education to overcome disadvantage and inter-generational poverty.

Within the Shoalhaven, Paul is involved in a range of local organisations including Bomaderry Rotary and serving as a member of the management committee of the Shoalcoast Legal Centre, a not for profit community legal centre.

Prior to joining RMB, Paul started his professional working life spending four years as an adviser to a local member of the NSW Parliament.